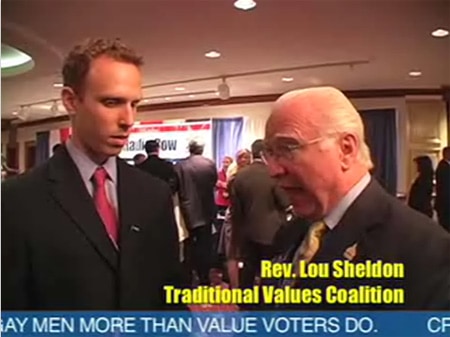 Another great report from Max Blumenthal of the Huffington Post.

Blumenthal writes: “If anything, the movement seemed more extreme and paranoid than it did four years ago. Rev. Lou Sheldon, dubbed ‘Lucky Louie’ by his former paymaster Jack Abramoff, told me that homosexuality is a ‘pathological disorder’ and ‘a groove’ that is difficult to escape from. He proceeded to passionately defend his friend, Senator Larry Craig, from allegations of homosexuality.”

And much, much more. A must-watch, along with Blumenthal’s commentary.

Theocracy Now: In Search of Values at the 2007 Value Voters Summit [huffington post]
(via AmericaBlog)