Cmdr. Kevin J. Ronan, a Navy physician, is currently on trial “charged with seven counts of conduct unbecoming an officer, three counts of illegal wiretapping and one count of obstruction of justice” related to secret videotaping of U.S. Naval Academy midshipmen at his home. Ronan reportedly served as a host to midshipmen as part of a Naval Academy program. According to NBC4, “Sponsors typically are Annapolis residents who open their homes to midshipmen so they can relax on weekends or school holidays.” 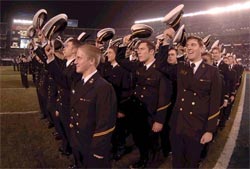 Now, gay pornography found on Ronan’s computer has been brought in as evidence of motivation:

“Ronan’s lawyers had tried to keep the evidence out of his trial, saying prosecutors couldn’t prove he was the one who downloaded the material, and that the implication he might be gay would turn the jury against him. ‘The effect of this is going to be to suggest, ‘This is a bad person, he’s got homosexual tendencies, and we certainly don’t want him in the Navy,” William Ferris, Ronan’s civilian attorney, said in the Washington Navy Yard courtroom. He noted the uproar over the recent comments of Gen. Peter Pace, the nation’s former top uniformed officer, who said he believed homosexual behavior was ‘immoral.’…’There is a strong prejudice against homosexuals in the military,’ Ferris said.”

The judge has allowed the evidence. Ronan could serve more than 10 years in prison if convicted.