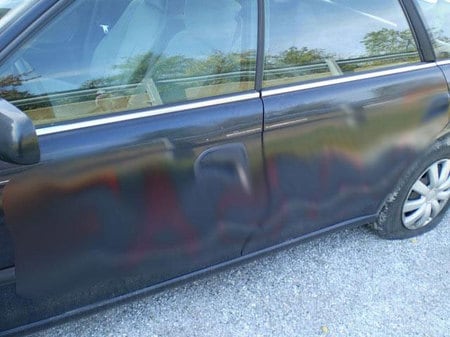 Two teenage sisters, Melissa Gaboury, 16, and Meghan Gaboury, 18, of St. Albans, Vermont, are scheduled to appear in court today for spray painting a car with anti-gay slurs and slashing its tires. They are to be charged with a hate crime.

The car reportedly belongs to a pair of distant relatives, Robert Driver and Dalton Flint, who are joined in a civil union.

The Burlington Free Press reports: “Police said an investigation led police to interview the Gaboury sisters, who are distantly related to the victims. Interviews with the teenagers revealed that the Gabourys’ interactions with Driver and Flint ‘have been increasingly volatile.’ Also, both sisters made anti-gay comments during their interviews, police said. A subsequent search of a GMC Blazer used by the sisters turned up a knife that matched the puncture marks on the slashed tires, and a can of red spray-paint hidden in a compartment beneath the rear seat.”