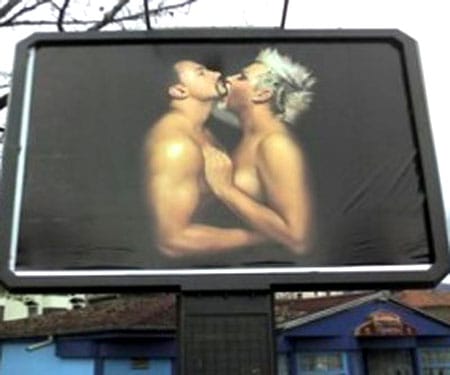 A billboard featuring Bulgarian pop star Azis in a sexual embrace with his partner was ordered taken down in the town of Kustendil, Bulgaria’s Sofia News Agency reports:

“The poster, which shows the new silicone breasts of the singer, advertises the fourth Bulgarian broadcast television channel TV2 to be launched on November 25. The producers have big hopes for the primetime show hosted by Azis will compete for TV ratings against the country’s most popular late night show, hosted by Slavi Trifonov on bTV.”

Azis made headlines in 2006 when he traveled to Germany to marry his partner, and again in August of this year when the couple had a baby daughter using a surrogate who was a friend of the sperm-providing singer.