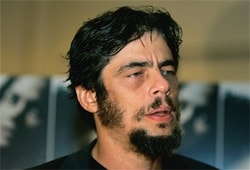 “Del Toro, who starred in ‘Traffic,’ among other movies, stood up to address the crowd and said, ‘Hi, my name is Benicio. I am not an addict, and I am not gay. I am here to support my friend.’ [Their source] continued, ‘Benicio is a sponsor to a guy who looks a little bit like Patricia Arquette. They met when Benicio was doing research for his druggie role in ‘Things We Lost in the Fire’ and kept in touch. Benicio is now his sponsor. But it’s weird because usually sponsors are people who have been through the 12 steps and can coach you through them, not some guy who’s just famous. But I guess it’s sweet.'”