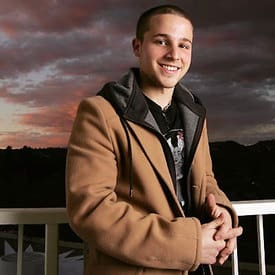 “I think the Van de Camps are loosely based on producer Marc Cherry’s family life, although I don’t know if his real mother was a strict as Bree. I can’t imagine that there are too many people in the world like that. It is always interesting to watch Andrew and Bree go at each other’s throats. She believes something so different and he does everything to make sure to cause her stress. It seems like they are already on [the path of acceptance]. Andrew and Bree have resolved their issues, as when he apologized for the way he used to act. He is beginning to mature now and has forgiven his mother for leaving him on the side of the road…[That was wicked] but it was so awesome to shoot. But I think he is now on a path towards becoming an adult. I think it’s necessary because the character is 20 now. Andrew still has his manipulating ways, he just approaches it more maturely…The good thing about Andrew is that in Season 1 and 2 as a gay character, he was very strong and confident as to who he was. I think that could be encouraging for other young homosexuals to become more confident and comfortable with who they are. A lot of times gay characters can be portrayed as the flamboyant and weak stereotype. Andrew is sociopathic and narcissistic and doesn’t get along with his mother, and he is also gay. Your sexual preferences doesn’t define you as a person. I’m heterosexual but that doesn’t define me as a person. No one would say, ‘Oh, he likes to have sex with girls,’ so why should it be the other way around?”

I’m not sure that being sociopathic and narcissistic are the attributes gay people want associated with them either, but I’ll assume he was simply elaborating on the earlier “strong and confident” statement.

On being stereotyped by playing a gay character, Pyfrom says: “I would be lying if I said I wasn’t a little worried, but honestly I think we are at a point now with television and movies where people can watch something and not stereotype the actor playing that character. I think if I had played a gay character 10 years ago then I would probably have something to worry about. I think people are a little bit more open-minded now. I think that the only time people stereotype is when the actor acts out in public. They go around parading things out to the media and then that is all people see when they are watching them on the screen. That’s one reason that I don’t do that. “