Cody Castagna, the escort involved in the late-night sexual rendezvous with former Washington state Rep. Richard Curtis which led to the lawmaker’s subsequent resignation, has been charged on six counts by Spokane County prosecutors including theft, conspiracy, and extortion. 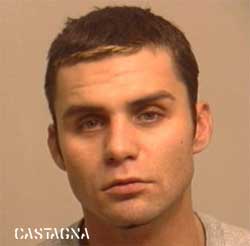 According to KXLY Spokane: “Warrants for four men – including Castagna and his brother Joey – were issued Wednesday. The three other individuals suspected of involvement in the case all face related charges. Defendants will be called Wednesday and asked to surrender themselves before officers take matters into their own hands. The word of prosecutors officially charging Castagna with illegal activity comes two days after an email was sent out asking potential past victims of Castagna’s to come forward. ‘There were multiple threats and multiple payoffs in this instance and it just seems like this was not the first time,’ Spokane Police Sergeant Joe Peterson said of the suspected blackmail that Castagna and his cohorts were accused of orchestrating in exchange for keeping the sexual encounter a secret. ‘And we’ve been told by other people that this is not the first time the suspects in this case have done this type of thing.’ For his part, Castagna has long maintained his innocence in the case.”

Curtis, a married man who exposed his secret life by making the initial reports of Castagna’s crime to the police, resigned at the end of October. Not only did the incident ruin his career and embarrass him, it exposed him as a hypocrite with an anti-gay voting record: “Elected to the state House of Representatives in 2004, Curtis has voted like a fiscal and social conservative. This spring, he voted against domestic partnerships for gay and lesbian couples. Last year, he opposed a gay rights bill that banned discrimination on the basis of sexual orientation.”

Previous Post: « Towleroad Guide to the Tube #210
Next Post: Jack Not Letting Project Runway “Shocker” Get Him Down »