Back in July, just after Adam Sandler’s I Now Pronounce You Chuck and Larry was released, I posted about a report in the Brisbane Times that Dan Murphy, the director and co-writer of the Australian film Strange Bedfellows, was concerned that Chuck and Larry filmmakers had ripped off his idea. 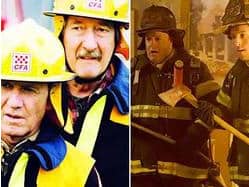 Yesterday, TMZ reported that the Bedfelllows filmmakers have filed a lawsuit against Adam Sandler’s Happy Madison Productions and Universal Studios. Actor Rob Schneider is apparently the link in all this:

“According to the papers, Rob Schneider got a copy of Strange Bedfellows, and gave it to Adam Sandler, who then turned around and made Chuck and Larry. The Aussie company alleges that Sandler’s company Happy Madison Productions have “continuously infringed [Bedfellows] copyright by distributing, selling, producing, and claiming authorship” over Chuck and Larry. As it happens, Chuck and Larry grossed $120 million in the U.S., while Bedfellows did about $4.2 million (U.S.) in its native land. The suit seeks unspecified damages.”

Aussies to Adam — You Stole Our “Gay” Firemen Flick! [tmz]