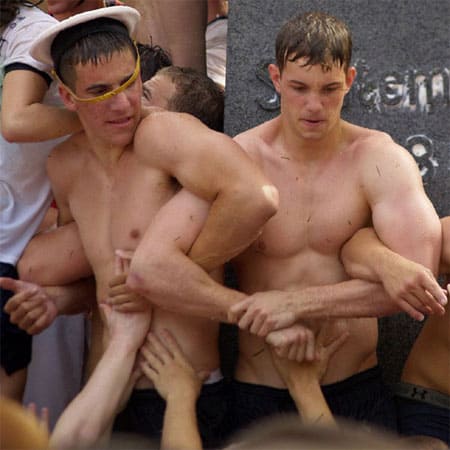 The Herndon climb, the annual decades-old Naval tradition wherein dozens of plebes attempt to get to the top of a greased-up 21-foot granite obelisk, is in danger of being tossed out because of “danger” to the first-year midshipmen. The climb takes place while upperclassmen soak the plebes with a garden hose. 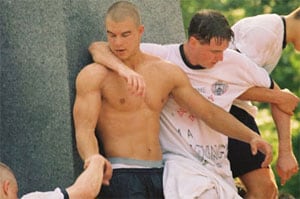 Said the Naval Academy’s public affairs office in a statement: “Similar to how our Navy looks at all traditions in the Fleet, we are evaluating the Herndon Monument Climb to ensure the event remains a valid part of our heritage but it is conducted with professionalism, respect, and most important, safety in mind.” A spokesperson for the Academy said she could not recall “any serious injuries” resulting from the climb.

The Washington Post reports: “Alumni scoffed at the risk of someone’s getting hurt, especially given the school’s mission to prepare officers for combat. ‘It’s not dangerous. That’s a lame excuse,’ said Dwight Crevelt, who made it to the top of the monument in 1976. Crevelt never graduated from the academy, because his eyesight went bad after two years at the school. But his memory of scaling the mud- and lard-spattered obelisk — and the week of glory that followed as he was feted like an admiral — remains strong. ‘It’s the wrong move to make,’ Crevelt said. ‘You’re trying to build team spirit, camaraderie, and that’s the ultimate in team effort. . . the team going after that.’ Herbert McMillan, a 1980 graduate who became an airline pilot and Annapolis politician, also opposes a change. ‘We’re going to send these guys to war but they can’t climb a monument because they might get hurt? Come on,’ he said. ‘It just seems like a solution in search of a problem.'”

Or might the ritual be under review for a different reason? Since the rise of blogs it has received much more exposure — on gay blogs in particular, and not just this one. No mention was made in the article of the fact that the muscled, shirtless event ends up looking, to outside observers, more like an Abercrombie & Fitch Quarterly photo shoot than an exercise in military rigor.

Might the U.S. military be worried that the event is gaying up its image a bit too much? 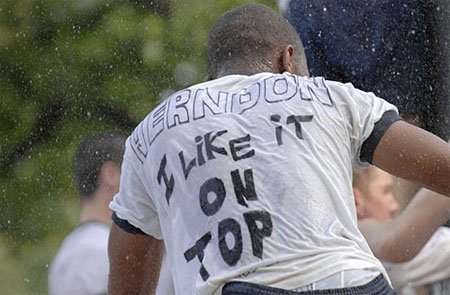 Previous Post: « On the Stage: Is He Dead? and The Little Mermaid
Next Post: News: PETA, Star Trek, NYC Waterfalls, Bugs, Shock Therapy »