On Sunday, Mike Huckabee made an appearance on Meet the Press with Tim Russert. Russert asked him about what statements he made in his 1998 book Kids Who Kill equating homosexuality with pedophilia and necrophilia. Huckabee danced around the statement, and basically said “we’re all sinners” and that he doesn’t know whether or not homosexuality is a choice, but that homosexual behavior certainly is. We’ve heard similar remarks from Giuliani.

On the “sinners” note, perhaps he should be hanging out with Terrence Howard, but Huckabee has instead made Chuck Norris his heavy. Huckabee claims he’s running a positive campaign so he has his right-hand celeb do the dirty work. Right after touting Huckabee’s non-negative campaign, Norris hits out at Mitt Romney for him.

The Politico also notes that in recent days Huckabee’s focus has gone from his faith to his record, although Tuesday night he appeared to be appealing to the Lord for his support: “We cannot do it, by arming ourselves and taking anyone out. We will go to the caucuses having knelt on our knees and having asked God for his wisdom.” 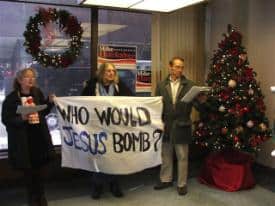 On Monday, Huckabee had anti-war protesters asking “Who Would Jesus Bomb?” arrested as they demonstrated in front of his Iowa headquarters.

Huckabee also looks to be the first to cross the writer’s strike picket lines, appearing tonight on Jay Leno’s return to the airwaves. Said Huckabee: “It’s just an incredible opportunity to be there, particularly the very first night he’s back from the writer’s strike. Besides, if all else fails and this whole process doesn’t work out, maybe he needs a sidekick and I’ll be auditioning tomorrow.”

The latest Des Moines register poll showed Huckabee and Obama in the lead position in their respective parties.

Here’s the transcript from Sunday’s Meet the Press:

RUSSERT: Peggy Noonan, a woman of faith who writes for The Wall Street Journal, said that sometimes it appears your philosophy is “This is what God wants,” and that doesn’t encourage discussion, it squelches it. And, and this is what you wrote in your book, “Kids Who Kill,” in 1998: “It is now difficult to keep track of the vast array of publicly endorsed and institutionally supported aberrations–from homosexuality and pedophilia to sadomasochism and necrophilia.” Why would you link homosexuality with sadomasochism, pedophilia and necrophilia?

HUCKABEE: Well, what I was pointing out is all of these are deviations from what has been the traditional concept of sexual behavior and men and women having children, raising those children in the context of a, of a traditional marriage and family. And, again, taken out of the larger context of that book, speaking about how so many of our social institutions have been broken down.

RUSSERT: But do you think homosexuality is equivalent to pedophilia…

HUCKABEE: Oh, of course not.

HUCKABEE: No, of course not. I didn’t say…

HUCKABEE: Tim, understand, when a Christian speaks of sin, a Christian says all of us are sinners. I’m a sinner, everybody’s a sinner. What one’s sin is, means it’s missing the mark. It’s missing the bull’s eye, the perfect point. I miss it every day; we all do. The perfection of God is seen in a marriage in which one man, one woman live together as a couple committed to each other as life partners. Now, even married couples don’t do that perfectly, so sin is not some act of equating people with being murderers or rapists…

RUSSERT: But when you say aberrant or unnatural, do you believe you’re born gay or you choose to be gay?

HUCKABEE: I don’t know whether people are born that way. People who are gay say that they’re born that way. But one thing I know, that the behavior one practices is a choice. We may have certain tendencies, but how we behave and how we carry out our behavior–but the important issue that I want to address, because I think when you bring up the faith question, Tim, I’ve been asked more about my faith than any person running for president. I’m OK with that. I hope I’ve answered these questions very candidly and very honestly. I think it’s important for us to talk about it. But the most important thing is to find out, does our faith influence our public policy and how? I’ve never tried to rewrite science textbooks. I’ve never tried to come out with some way of imposing a doctrinaire Christian perspective in a way that is really against the Constitution. I’ve never done that.

You may have missed…
Huckabee on Having Gays in His White House: Absolutely, Why Not? [tr]
Mike Huckabee Stands By 1992 AIDS Quarantine Remarks [tr]
Huckabee to GQ: Gay Marriage Will End Civilization [tr]

Previous Post: « Who Wore Short Shorts? Kobe Bryant and the Lakers
Next Post: Joy in New Hampshire as Couples are Civil Unionized »