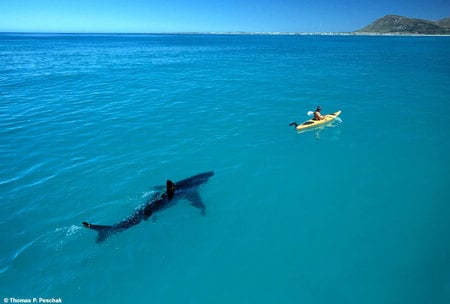 This is a pretty terrifying shot from South Africa, published in Britain’s Daily Mail today:

“Alone in his tiny plastic sea kayak, marine biologist Trey Snow had hoped to stealthily track a great white shark. But he had the shock of his life when he spotted a giant fin and realised it was he who was being stalked – by surely one of the most feared killers in the world. The magnificent creature initially dived to the seabed, inspecting the kayak from below, before rising menacingly to the surface. Luckily for Trey, the 13ft-long shark was more inquisitive than hungry…This incredible picture was taken by wildlife photographer Thomas Peschak – who had to tie himself to the high bridge of a nearby vessel and lean precariously over the ocean before he could get his shot.”

You may have missed…
Shell Wildlife Photography Winners Announced [tr]