Rep. Tom Lantos (D-CA) died today at the National Naval Medical Center in Bethesda, Maryland after a battle with esophageal cancer. He was 80, and a survivor of the Holocaust. 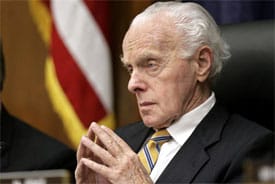 The Washington Post reports: “Lantos, born in Budapest to Hungarian Jews, served 14 terms in the House of Representatives. He is the only Holocaust survivor elected to Congress. His district included southwest San Francisco and much of San Mateo County, where he was known for supporting the socially liberal agenda of his constituents. Last year, he announced he would not seek reelection because of his cancer treatment…President Bush issued a statement praising Lantos as ‘a man of character and a champion of human rights… As the only Holocaust survivor to serve in Congress, Tom was a living reminder that we must never turn a blind eye to the suffering of the innocent at the hands of evil men.’ House Speaker Nancy Pelosi (D-Calif.), said Lantos ‘used his chairmanship of the [House] Foreign Affairs Committee to empower the powerless and give voice to the voiceless throughout the world.’ She said his death ‘is a profound loss for the Congress and for the nation and a terrible loss for me personally.'”

Human Rights Campaign President Joe Solmonese also issued a statement, saying, in part, “Over his tenure in Congress, Rep. Lantos was a strong ally in our community’s fight for equality. He voted against a constitutional amendment defining marriage between one man and one woman, but also took the rare and courageous step by voicing support for same-sex marriage. He believed GLBT people should be allowed to adopt, and supported worker employment protections and hate crime legislation. On behalf of the Human Rights Campaign we remember the work of Rep. Tom Lantos and say thank you.”