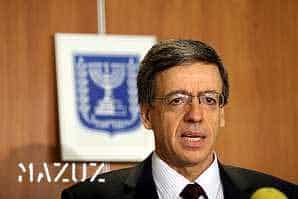 “According to a statement issued by Mazuz Sunday, ‘there is no legal reason to prevent a same-sex couple, or either one of them, from adopting a child who is not the biological offspring of one of the partners, according to the same criteria applied to a single person who wants to adopt a child and conditional, as is customary, on considerations of the best interests of the child.’ Mazuz added that his directive established the principle of the legal right for homosexual couples to adopt, but that each request by a couple had to be investigated on its own merits. However, he emphasized that the authorities could not reject an adoption request by a homosexual couple solely on the grounds that having two parents of the same sex was by definition bad for the child. ‘In accordance with the High Court ruling,’ Mazuz wrote, ”the well-being of the adopted child’ is a complex principle that includes many aspects, and one may not say a priori that because the couple is same-sex, it will be bad for the child to be adopted by it. Therefore, the question of the identity of the couple is only one of the relevant considerations that must be taken into account together with all the other relevant circumstances and considerations.'”

Israeli lawmakers are set to discuss the ruling today.

Previous Post: « Daniel Craig: Why is Everyone Ramming Amy Winehouse Out?
Next Post: John Barrowman: Some People Are Gay, Get Over It »