The West Australian reports that sultry lesbianic things develop between Penelope Cruz and Scarlett Johansson in a darkroom in Woody’ Allen’s next film: 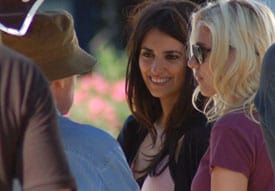 It’s not the first time for Cruz. Cruz was mistakenly thought to have locked lips with her own sister in a recent video for their brother, musician Eduardo Cruz. It later was revealed that Cruz was actually getting busy with actress Mia Maestro.