This crocodile obviously saw an opportunity to get right to the good stuff.

“The 16 foot-long saltwater crocodile came within an arm’s length of inflicting serious damage to the tourist, if not killing him. Novon Mashiah, 27, an Israeli backpacker, spotted the big crocodile during a fishing trip in the Northern Territory. Determined to have a picture taken of himself with the crocodile, he posed while leaning out of the back of his fishing boat, pointing towards the predator. ‘I began playing with it for a photo,’ Mr Mashiah said. ‘I was pointing at it when it suddenly jumped up at me – I didn’t realise that crocs were so aggressive.’ The ‘saltie’ – which experts believe probably approached the boat in search of a free feed of fish – propelled itself out of the water with terrifying speed. After narrowly missing its prey, it smashed into the side of the small metal boat before plunging back into the water. ‘I was shocked – the animal clearly wanted to kill me,’ Mr Mashiah, from Tel Aviv, told the Northern Territory News.” 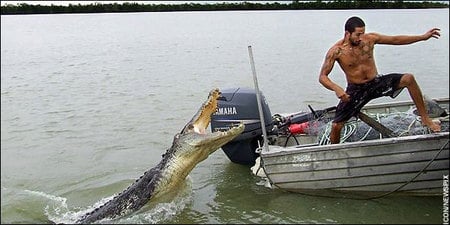