Quite possibly. In the wake of the Eliot Spitzer prostitution scandal that went down yesterday, The Advocate looks at how the rise of the state’s first legally blind and African American governor, David Paterson, might work in favor of gay rights legislation: 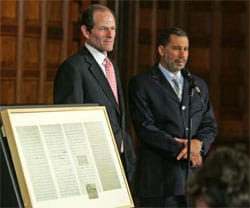 “If Spitzer were to resign, Lt. Gov. David Paterson would assume the responsibilities of governor, which most LGBT activists guessed would be the best-case scenario for gays and lesbians in the state. Paterson, who is legally blind and represented Harlem in the state senate, has typically been ahead of his time on gay issues over the years. ‘David Paterson is a terrific, progressive guy — extremely LGBT-friendly,’ said Ethan Geto, a Democratic analyst and LGBT activist. ‘He is somebody who would absolutely follow through on the commitment of the senate Democratic conference to pass gay marriage.’ Paterson has been on record in support of marriage equality as early as 1994. When Paterson was asked if he would take part in pushing through the marriage bill following his inauguration in January 2007, he told the New York Blade, ‘I’m not going to be in that fight — I’m going to be in front of that fight because my first day as [senate minority leader] was the day we passed the Sexual Orientation Non-Discrimination Act. One of the reasons we need same-sex marriage is because the statistics for heterosexual marriage are so bad; that might be a way to upgrade some of the success rates.’ As far back as 1987, Paterson refused to pass a state hate-crimes bill that didn’t provide protections for gays and lesbians. ‘He was willing to let everything go down rather than to exclude us,’ Sherrill recalled.”

In related news, it’s looking more and more likely that a resignation from Spitzer is in the works. WCBS: “Eliot Spitzer is not expected to continue as governor of New York and may resign in the coming days, sources told CBS 2 HD on Monday shortly after it was reported that he was linked to a prostitution ring. State Assemblyman James Tedisco (R-Schenectady) told CBS 2 HD that he spoke with Lt. Governor Paterson Monday evening and that the two discussed Paterson taking on a new role of leadership, leading Tedisco to believe that action was ‘forthcoming.'”

Could Spitzer’s Woes Have a Silver Lining? [the advocate]