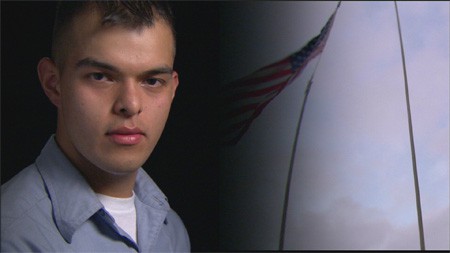 On Friday, I posted an interview with Jeff Dupre, a producer on the PBS special documentary mini-series Carrier. Carrier is a character-driven total immersion in the high-stakes world of a nuclear air craft carrier. A team of 17 filmmakers spent 6 months on the USS Nimitz on a full deployment to the Persian Gulf. The 10-hour documentary began airing last night and continues on through Thursday on PBS from 9-11pm ET (check local listings).

One of the hours tonight is called “Super Secrets” and details some of the more hush-hush goings-on aboard the Nimitz, including several interviews with gay and lesbian servicemembers. While those who are currently serving are pixellated in their interviews, one soldier you’ll be able to see quite clearly is Brian Downey, who served as a quartermaster third class petty officer in the navigation department of the Nimitz.

Downey served four years in the Navy and is currently living in San Diego, working at a bar, and enrolling in school to be a medical assistant. Downey grew up on a Navajo reservation in the four corners area where Arizona, New Mexico, Utah, and Colorado come together.

I had the opportunity to ask Downey a few questions about his service and life aboard the Nimitz.

Did you anticipate any particular challenges coming aboard the Nimitz as a gay man?

I never saw anything as a real challenge. We all have our little jokes about our backgrounds just like anybody does. Nothing was ever really an issue. It was never really a struggle or anything. You kind of have to get along. You’re gonna work with each other, you’re gonna see each other.

Why did you decide to enlist in the Navy?

I wanted to enlist for one, to serve my country. I knew I would have to put a lot of things aside. I understood that I had to make a sacrifice and I feel like more of an enriched person because of it. I wanted to get out there, I wanted to learn what people were like. Everybody wants to see the world, you know, but I feel like being in this country and to have the freedoms that we have…I wanted to feel like I worked at least for what I have, or at least understood the reasons why I have it. Why do we do what we do? What’s the price for freedom? It wasnt anything else. In all honesty I think it would be a great thing for a lot of people to do. I’m not an advocate of [telling people] ‘hey you should be in the military,’ or for the draft, or anything like that. [But the military] helps you understand more who we are as a people. That’s the reason I did it.

What were your duties aboard the ship and did you know what you wanted to do before you enlisted?

The first day when I sat down and took a test, all these jobs came up. One thing that really caught my attention was ‘aviation anti-submarine warfare systems operator (AW)’.’What they do are search and rescue missions. There’s also an acoustic version of the job using radar. I just knew I wanted to get into search and rescue. It was very dynamic job. I ended up being part of one of the smallest departments on the ship but we had the huge responsibility of [ensuring the] overall safe navigation of the ship, making sure it goes where it needs to go and gets there safely. We’re the primary assistants in the pilot house. That was my overall responsibility. I was also the logistics supplier for my department. For a brief time I was involved with charts but that’s a huge responsibility that takes up all of your time.

Would you do it again?

I was in all four years. Did my duty. In all honesty it wouldn’t bother me to go back if I ever got called back to serve as part of a war. But right now I’m enjoying my civilian life.

One of your other jobs, as we see in Carrier, was the raising and lowering of the flag?

How was it serving under ‘Don’t Ask, Don’t Tell’?

Interview continued, AFTER THE JUMP…

How was it serving under ‘Don’t Ask, Don’t Tell’?

It wasn’t really much of an issue for anybody. I can’t speak for everybody, but for me it wasn’t an issue. At the time I didn’t have a problem with it. Before, when I said I had to make sacrifices, [I meant that] quite honestly there were far more things bigger than myself. I’m [not] there to make a statement, I’m there to do my job.

Did anybody who found out about your sexuality give you a hard time?

Nobody really. It’s not like I said ‘hey this, hey that, blah blah blah.’ It’s not like I advertised it. I wasn’t a big queen running down the passageways and stuff. There were people that knew. And if they knew, they knew. If they didnt they didnt, big deal. 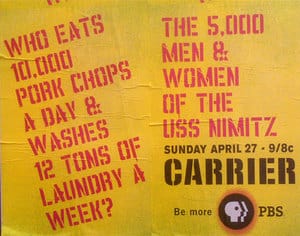 Did you feel like there was homophobia aboard the ship and how did you deal with it?

You always feel like you want to change somebody’s mind. You can’t do that for somebody but you can definitely help turn their mind in a different direction. You always want to help somebody try to understand better. In a lot of people’s minds I’m gonna walk around with a limp wrist, and have a switch in my walk, and I’m gonna lisp up and down all day, you know?

I had a friend on the ship – he was an awesome guy, masculine as they come – we used to be workout buddies. He’d always spot me, I’d always spot him. I never thought of anything really and when he found out he was like ‘dude we work out together’ and [I said to him] ‘I’m not gonna invade your privacy and your space and on top of that you’re not my type anyway, so why would I?’ And he’s like, ‘Why not? I don’t think I’m a bad looking guy.’ I said, ‘No you’re not. You’re a good looking guy but I’m just not gonna go there.’ And it really made him understand a little more that people out there who are gay [can be] very mellow and kick back, and just normal.

People would joke with me because they noticed I took care of myself in a way that most of the guys didn’t. I made sure I was clean shaven. I made sure my hair was regulation but still stylish (laughs) but not too much. I got along with a lot of guys there. One guy would call me ‘Princess’ every now and then because I spent more time getting ready. I was always ironing my uniform. You could always wear your coveralls as long as they were clean and pressed. I was always in my utilities, I always kind of presented myself very well, and he was like, ‘Why do you always wear that?’ And I said, ‘Because I take pride in what I’m doing.’ Once he found out (I was gay) he was just kind of like ‘Oh my god, I’m so sorry, I hope you werent offended.’ He was always ragging on me for being who I was.

There were people that I’m sure felt uneasy but it’s not like I bothered them or wanted to be close buddies or anything. There were a lot of guys I knew who had mixed feelings about it. When I first came in somebody wanted to fight me because they thought I was a certain some way or another and then one night he came back on the ship drunk off his ass one night and I kind of put him in his place about it.

How do you feel about the ‘Don’t Ask, Don’t Tell’ policy in general?

Iin this day and age and the way things are changing, if they drop it I don’t see that it would be a big deal for anybody. People know each other on the ship. And that’s just in the little community itself. If they were to drop the policy I’m sure it wouldn’t cause much of a security risk for anybody. It’s always been around — there have always been people in the military that have served that are gay. And people that have been in great positions — people that are in very high positions — and if it were dropped I’m sure it wouldn’t be a big deal. We’re not here to freak you out, we’re here to try to do something with you – we need to do our job and do it well. We just happen to be a little different — just like blacks were different, just like women were different. Well before those times there were gays in the military. I think it would be a very big social uplifting, an awakening for people.