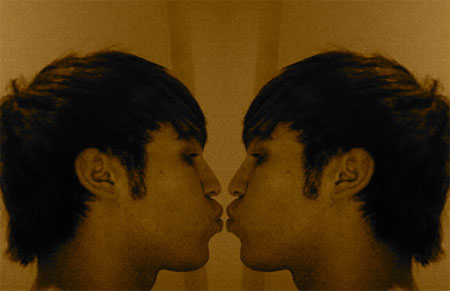 New York magazine ran into Fall Out Boy’s Pete Wentz hanging out with members of Gym Class Heroes and Panic at the Disco at the gay/mixed night at his bar Angels & Kings. They report that Pete was attending because he likes to “run with the gays.”

NY Intel: “Wentz is straight, like so straight people can’t stop talking about how he may have knocked up Ashlee Simpson! Naturally, we accosted him. ‘I heard it’s gay night, right?’ he asked us, after we complimented his pointy hair. Turns out Pete has ‘great ‘dar,’ by which he means he has a highly tuned interior electromagnetic sensor which lets him know when there are moving or fixed homosexuals nearby. So naturally we asked, Do you like running with gays, Pete? ‘It seems sometimes like nobody knows how to have a good time anymore,’ he told us. ‘But the gays are always having a good time.'”