Sunil Pant, who heads Nepal’s gay activist group the Blue Diamond Society, became the first openly gay politician to be elected to parliament in that country, the Times of India reports. There were several gay men running in the nation’s first vote since 1999. They were all funded by the Nepal Communist Party (United), a junior partner in the ruling alliance: 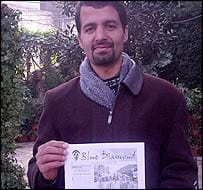 “Sunil Babu Pant, a 35-year-old crusader for gay rights who founded the first organisation to protect the rights of the sexual minorities and ushered in a social revolution, now becomes part of Nepal’s political history as well after being chosen by a minor communist party to represent it in the 601-member constituent assembly. ‘We are honoured to send Pant as our representative to the constituent assembly,’ said Ganesh Shah of Communist Party, who’s Communist Party of Nepal-United (CPN-U) has won five seats in the assembly under the proportional representation system. ‘We hope it will improve the lives of a people who are the most repressed in Nepal, disowned both by society and their own families,’ he added. Pant, a computer engineer from Belarus, founded the Blue Diamond Society in 2002. It is now one of the best known gay rights groups in South Asia, fighting for molested and detained gays, spreads HIV/AIDS awareness, runs a hospice for terminally ill gay patients and provides training and jobs to members of the community.”

Said Pant: “Representing a sexual minority I will make sure the new constitution protects sexual groups, people with disabilities, small indigenous castes and others.”