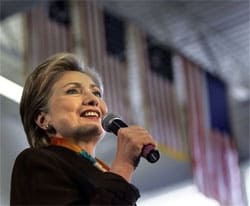 “Obama is 40 delegates shy of clinching the nomination, but he is widely expected to make up the difference Tuesday with superdelegate support and votes in South Dakota and Montana. Once he reaches the magic number of 2,118, Clinton will acknowledge that he has secured the necessary delegates to be the nominee. The former first lady will stop short of formally suspending or ending her race in her speech in New York City. She will pledge to continue to speak out on issues like health care. But for all intents and purposes, the two senior officials said, the campaign is over…The advisers said Clinton has made a strategic decision to not formally end her campaign, giving her leverage to negotiate with Obama on various matters including a possible vice presidential nomination for her. She also wants to press him on issues he should focus on in the fall, such as health care.”

The Clinton campaign says that report is wrong: “The AP story is incorrect. Senator Clinton will not concede the nomination this evening.”