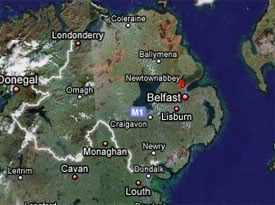 “Stephen Scott, 27, was walking home near Ballyduff Brae in Newtownabbey on Wednesday night when he was attacked. Three youths, thought to be in their late teens, knocked him to the ground and continued kicking and punching him as they shouted insults. Mr Scott is being treated in hospital for a head injury, a leg injury and broken ribs. ‘As far as I’m concerned they’re scum,’ he said. ‘It’s enough to take a life – there were three of them on me and I was left for dead.’ He urged victims of homophobic attacks not to be afraid to tell police.”

In other news, the first gay bar outside of a major Irish city recently opened in the Northern Ireland town of Strabane.