Dr. Edgar Mitchell, the sixth man to walk on the moon and the record-holder (with Alan Shepard) for the longest moon walk, claimed on the Kerrang! radio show that Earth has been visited by extraterrestrials and that the government has engaged in a six-decade cover-up to keep it quiet: 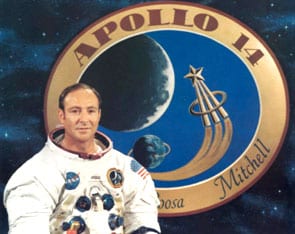 “Dr Mitchell, 77, said during a radio interview that sources at the space agency who had had contact with aliens described the beings as ‘little people who look strange to us.’ He said supposedly real-life ET’s were similar to the traditional image of a small frame, large eyes and head. Chillingly, he claimed our technology is ‘not nearly as sophisticated’ as theirs and ‘had they been hostile’, he warned ‘we would be been gone by now'”.

Said Mitchell: “I happen to have been privileged enough to be in on the fact that we’ve been visited on this planet and the UFO phenomena is real. It’s been well covered up by all our governments for the last 60 years or so, but slowly it’s leaked out and some of us have been privileged to have been briefed on some of it. I’ve been in military and intelligence circles, who know that beneath the surface of what has been public knowledge, yes – we have been visited. Reading the papers recently, it’s been happening quite a bit. This is really starting to open up. I think we’re headed for real disclosure and some serious organisations are moving in that direction.”

NASA released a statement denying Mitchell’s claims: “NASA does not track UFOs. NASA is not involved in any sort of cover up about alien life on this planet or anywhere in the universe. Dr Mitchell is a great American, but we do not share his opinions on this issue.”

Previous Post: « Obama and McCain Campaign Posters Under the Influence
Next Post: John Barrowman Heads to L.A. to Take the Gay Test »