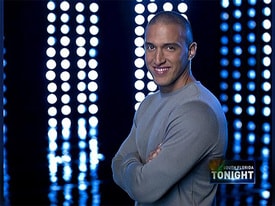 “Verdugo joined the police force in 2001, five years after the movie was filmed. ‘He’s a great cop with a distinguished record of serving this community for many years,’ said Al Milian, Verdugo’s attorney. Milian would not deny or confirm Verdugo’s possible involvement in the film. ‘I think every police officer during their career are subject to investigations. The overwhelming number of allegations are always found to be unfounded,’ Milian said. Milian said that ever since Verdugo’s sexual orientation was revealed in 2004, he has dealt with discrimination and harassment. ‘I think when you have a certain lifestyle in the 21st century, you’re always going to be subject to heightened scrutiny,’ Milian said…Milian said he is prepared to defend Verdugo’s record and outstanding contribution to the community.”

Here is what got him in trouble (it’s most definitely NSFW).

Verdugo’s finalist audition tape for Design Star, AFTER THE JUMP…