There have been tons of rumors circulating regarding then Mayor Sarah Palin’s request to remove books from Wasilla’s public library, including a debunked list of specific books. 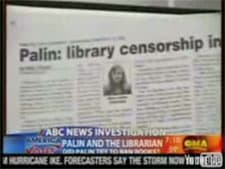