Robert’s Lafitte, a gay bar in Galveston, Texas, which was hit with a direct blow by Hurricane Ike, has adopted a caretaker role after the storm, according to Reuters: 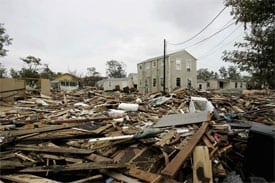 “The first of two bars to reopen after Ike’s onslaught on Saturday, Robert’s Lafitte is a haven in the storm — for gays, straights, anyone who needs a place to drink and find comfort. ‘You can see there’s not too much worry and stress on people’s faces,’ said Dixie Monroe, a transgender barmaid who wore a tiger-print cowboy hat and a low-cut top. Outside, Black Hawk helicopters clattered overhead and emergency teams searched for people stranded in the flooded city of 60,000 people. Up the street lay a huge field of splintered wood.”

Additionally: “The bar is setting out food donated by locals for people in need. Some 20,000 people are thought to be still on the island and food and water are scarce. ‘It’s more than a life saver. This is like the Coast Guard,’ said Brian DeLeon, a straight restaurant worker who had not visited the bar before. ‘These are the people who take you up out of the water and make life livable. Once I get back to work, I’m coming back here.'”