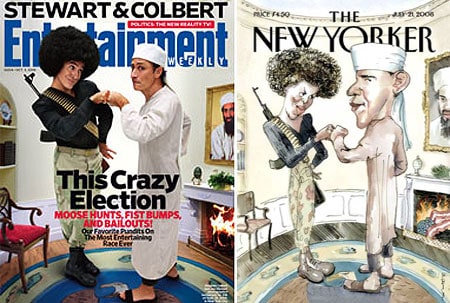 In the interview, Colbert and Stewart dish on the nomination of Sarah Palin, the candidates’ personas, the ‘gotcha’ moments, the financial crisis, and their own personal advantages as comedic pundits — being able to view the election from a distance, and to be wrong and not have to worry about it.

Says Colbert: “One of the things I love about my character is I can make vast declarations and it doesn’t matter if I’m wrong. I love being wrong. So my character can tell you exactly what’s going to happen: The Democrats are going to change everything. We’re going to have gay parents marrying their own gay babies. Obama’s gonna be sworn in on a gay baby. The oath is gonna end ‘So help me, gay baby.'”