The headline “Democratic group backs gay-marriage ban in Florida Constitution” was a bit shocking until I saw that the group was being lead by Fort Lauderdale’s head anti-gay pig Jim Naugle: 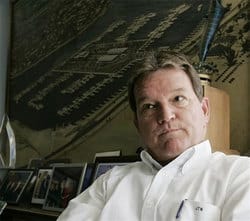 “Outside the Stephen P. Clark Government Center in downtown Miami, where the group of Democrats rallied, some held signs that read, ‘Yes 2 Marriage,’ while others clutched Bibles. Nathaniel Wilcox, executive director of People United to Lead the Struggle for Equality, known as PULSE, was among the supporters, saying the institution of marriage must be saved. ‘We must not sell our moral values to placate others,’ he said. The group insists its push isn’t about targeting homosexuals, though they said they oppose gay marriage. Naugle, a lifelong Democrat known to back Republicans, has a history of riling the gay community in Fort Lauderdale. In recent years, he has made blunt, and often critical statements about his support of a $250,000 single-occupancy toilet on the beach that he said would reduce gay sex in public restrooms. He later opposed moving the Stonewall Library, a collection of gay-themed materials, into a city building. Still, he contends his support for Amendment 2 has nothing to do with homosexuals. ‘It’s about defending the institution of marriage, which should be defined as between one man and one woman,’ he said.”