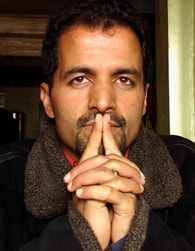 Fridae reports: “Nepali English language newspapers love Hollywood celebrity gossip. They regularly cover hot news about Britney and Madonna. Lesson number one: this is how you sell newspapers in Nepal. The second lesson was world famous in countries with strong ties to Britain. Go to www.page3.com and you will see photos of lovely ladies, too naked to appear in Singapore’s Straits Times, Hong Kong’s South China Morning Post or Nepali newspapers. The photos, on the notorious PAGE 3, made The Sun, a London tabloid, one of the most profitable newspapers on the planet. Learning these lessons, Subash Pokharel, working with the Blue Diamond Society, started a new English-language weekly entertainment tabloid for Nepal. It’s called PAGE 6…The first issue was launched in August, 2007.”

Here’s the smart part: “Embedded in PAGE 6 is page 4, the page dedicated to ‘gender talk’ and ‘diversity’ – a weekly dose of LGBTI news and comment. PAGE 6 gets page 4 across to a broad Nepali audience. In the year that PAGE 6 has been published, all the covers have been pop celebrities – except for one. When the BDS won a major court case in December, 2007, that story went on the cover. Circulation did not drop. The next week sexy celebrities returned to page one.”

A sexy first in Nepal [fridae]
(via queerty)