Rosie O’Donnell is returning to television with Rosie’s Variety Show, a Thanksgiving special that will serve as a test as to whether or not viewers might embrace a series: 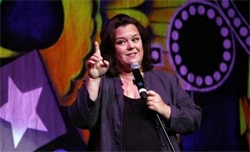 “The special will feature celebrity guests, musical acts, comedy skits and a prize giveaway for the show’s in-studio and home audiences. David Friedman (“Last Call With Carson Daly”) has been tapped to executive produce along with O’Donnell. The show’s Nov. 26 premiere date manages to trump Fox’s upcoming Osbourne family variety show, which is expected to debut in the winter or spring.”

Said Friedman: “This is a genre that everybody is anticipating is going to come back. Rosie sort of invented the daytime variety show. Without question, Rosie is the right person to bring this back.”