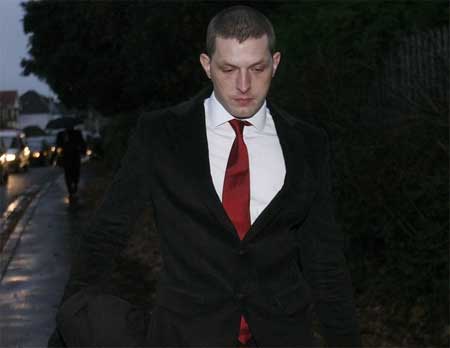 Jurors heard today that Boy George chained male model/escort Auden Carlsen (above, leaving court last week) to his bed because he thought Carlsen had stolen photos from his computer to use on his website: 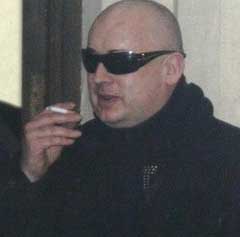 “‘I absolutely admit I had him in the handcuffs, so he wouldn’t go anywhere while I checked the computer. I certainly wasn’t going to kill him, that’s hardly going to do my career any good is it?’ he told police. O’Dowd, 47, met Norwegian male escort Auden Carlsen over the Internet and the pair arranged to meet for a pornographic photo shoot…Carlsen has accused O’Dowd of chaining him up on their second meeting at the singer’s east London flat and beating him with a chain. O’Dowd admitted to police that he had hit Carlsen before, but only through choice. ‘You can’t spank anyone if they don’t want you to,’ he said, asserting that on the occasion in question he had not punched or assaulted the escort. ‘Those are serious handcuffs, there was no reason to beat him up when I’d put him in those,’ he said. ‘I was just so angry. It wasn’t about me doing anything, I just wanted to make sure he did not leave my house.'”

You may have missed….
Boy George Trial Begins Over Alleged Imprisonment of Male Escort [tr]