Florida Governor Charlie Crist is getting married next month and the gay group Impact Florida plans to be there to peacefully protest the recent passage of Amendment 2, which bans same-sex marriage in the state, and the governor’s endorsement of it: 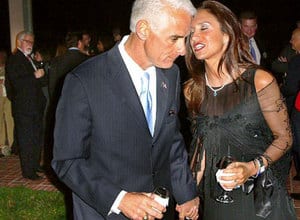 The Suncoast News reports: “The group Impact-Florida has called on its members to gather in pink T-shirts outside First United Methodist Church of St. Petersburg on Dec.12 to “congratulate” Crist and Rome while their wedding takes place inside. The demonstration will continue outside the wedding reception at the Renaissance Vinoy Resort in downtown St. Petersburg. ‘After the positive congratulatory observance, there will be a candlelight vigil close to the [Vinoy] in downtown St. Pete to mourn the loss of gays right to get married,’ the group’s Web site states, referring to a gay marriage ban that passed by ballot initiative in November. Crist endorsed Amendment 2 prior to its passage by 61.9 percent of state voters; it needed 60 percent to become part of the state Constitution.”

“Our objective will be to celebrate the Governor’s fundamental right to marry. The demonstration will be peaceful and respectful. Governor Crist, an outspoken proponent of Amendment 2, is getting married. He is exercising the same fundamental right millions of Floridians are now denied because of the passage of Amendment 2. Perhaps it will inspire him and the many Floridians that voted for Amendment 2 to rethink their positions on the question of what constitutes a marriage.”