The Empire State Pride Agenda’s Executive Director Alan Van Capelle released a statement yesterday in reaction to reports that a marriage equality vote was used as a bargaining chip in the handshake deal struck by New York Senate Democrats yesterday. 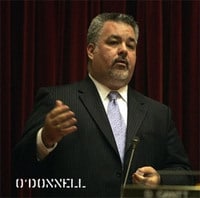 Said Van Capelle: “We are still awaiting the final details of the announced State Senate leadership deal. We would expect that any rumors that marriage equality was somehow a part of this deal are just that—rumors. Civil rights should never be a bargaining chip in any political leadership battle, and we would be outraged if the issue of marriage equality was even part of the discussions.”

The NYT reported: “Word of the potential retreat on a same-sex marriage legislation disappointed some backers of equal treatment for gay people. ‘All civil rights movements have moments where they move forward, and moments of perceived setbacks,’ said Assemblyman Daniel J. O’Donnell of Manhattan. ‘If in fact our civil rights were bargained away, that’s deplorable. But in the end, I think justice and fairness will prevail.'”

Previous Post: « This is What a Jim Carrey – Ewan McGregor Kiss Looks Like
Next Post: Florida Gov. Crist: Gays Have the Right to Protest My Wedding »