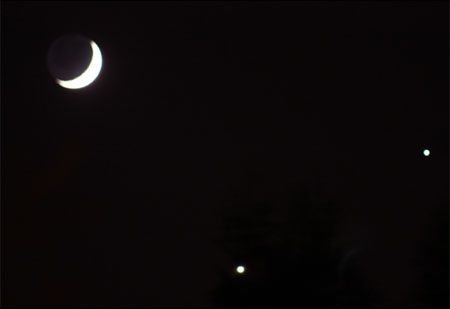 If you looked up in the sky last night you may have seen the rare conjunction of the Moon, Jupiter (far right), and Venus, an event that won’t happen again until May 11, 2011. Above is a photo taken from Cambridge, Massachusetts.

A somewhat shaky video of the event that was shot in Australia, is AFTER THE JUMP…

In the northern hemisphere, the celestial event appeared as sort of a frown because of the crescent moon, while in Australia’s southern hemisphere the same event reversed to form a smiley face.