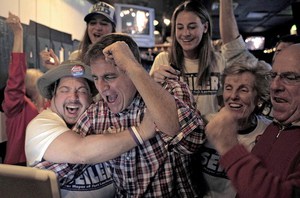 Joe.My.God reports: “Seiler was opposed by the gay political group Dolphin Democrats, who published ads noting his endorsement by Jim Naugle. The legitimacy of Seiler’s candidacy was questioned early in the campaign when he rented a home six blocks from his longtime home in adjacent Wilton Manors, where Seiler was mayor from 1998-2000, in order to establish residency inside Fort Lauderdale’s city limits. Seiler’s state legislative district included a portion of Fort Lauderdale.”

Monday I noted that Naugle told the Sun-Sentinel that while the ads could have the effect of hurting Seiler by denying him the gay vote, they could also have the effect of boosting Seiler among non-gay voters who had re-elected Naugle eight consecutive times. And it appears Naugle may have been right.

However, Seiler seems more gay-friendly than the homophobic Naugle.

In a video shot late in the day yesterday by Father Tony for Joe.My.God, Seiler brushes off Naugle’s endorsement and states his positions on several LGBT issues.