Yesterday I posted about remarks made on Monday by Colorado state senator Scott Renfroe equating gays to murderers in response to a Colorado same-sex partner health benefits that was up for a vote: 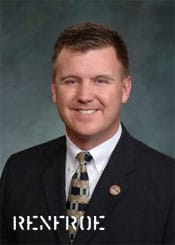 "Homosexuality is seen as a violation of this natural created order, andit is an offense to God…I'm not saying this (homosexuality) is theonly sin that's out there. We have murder. We have all sorts of sin. Wehave adultery. And we don't make laws making those legal, and we wouldnever think to make murder legal."

The measure passed yesterday: "A bill to allow the partners of gay andlesbian state employees to share in state health care coverage in theway married couples can passed the state Senate on final reading todaywith considerably less drama than the prior day's debate over the bill.Senate Bill 88, from Sen. Jennifer Veiga, D-Denver, passed on a22-12 vote, with one senator absent. Two Republicans Sen. Al White,R-Hayden, and Sen. Ken Kester, R-Las Animas voted with Democrats inapproving the bill. Unlike yesterday, when passions flared on both sides, the bill saw no debate today, just a vote."

Listen to newly released audio of Renfroe's remarks, AFTER THE JUMP…