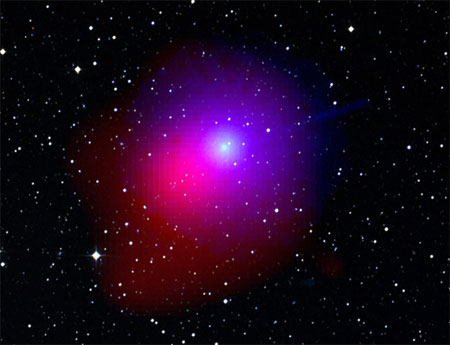 A comet discovered in 2008 by Taiwanese astronomers is about to make its closest-ever pass by Earth. Comet Lulin will be most visible tonight and tomorrow night from areas in North America away from cities as it passes through an area of the sky close to the constellation of Leo.

"At that time, it will come within 61 million kilometres, or 40% the Sun-Earth distance, from our planet," according to New Scientist.

Two images have been released of the comet. The one above merges two images from NASA's Swift telescope, an Ultraviolet/Optical and an X-Ray image (thus the colorization): "The comet's tail extends off to the right, while a cloud of oxygen andhydrogen atoms extends far Sun-ward of the comet. At the time of theobservation, the comet was 160 million km from Earth and 185 million kmfrom the Sun."

One more image taken by Arizona astronomer Jack Newton, below.

A guide to finding the comet in the sky, and a short time-lapse film, AFTER THE JUMP… 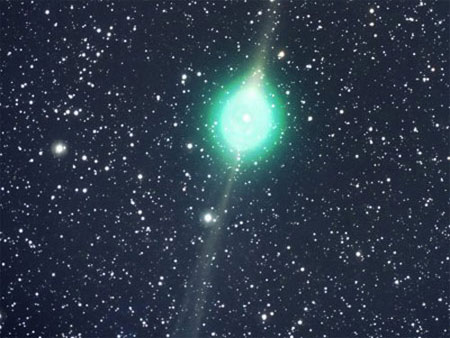