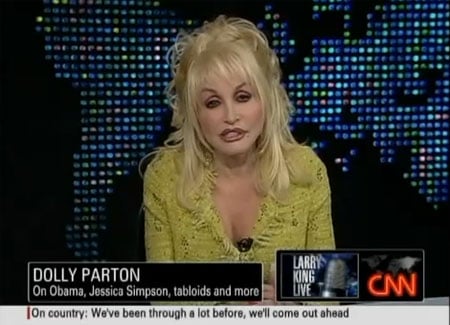 Dolly Parton sat down with Larry King on Saturday night and spoke to King on a variety topics, including how she handles rumors she is gay.

KING: You — you're unusual in many respects. You're a greatentertainer. And I mean, the Kennedy Center Honors don't happen tomany. You also have a lot of gay fans. You've even dealt with gayrumors yourself. What is your appeal, do you think, to the gaycommunity?

PARTON: Well, I think the gay people have alwaysliked me because I have always been myself. I'm not intimidated by howpeople perceive me. I don't judge nor criticize people. I think that'sanother reason that they at least know that I'm sympathetic. I thinkall people have a right to be who they are. We're all God's childrenand God should be the one to judge, not other people. So Ihave a lot of gay friends, lesbian friends. I work with a lot ofpeople. I am not gay. I have been accused of that. But I have beenhappily married for 42 years to the same man. And he's not the leastbit threatened, you know, by the fact that I may be gay. And he knows Ihave a lot of friends. But I love everybody. It doesn't matter to me.