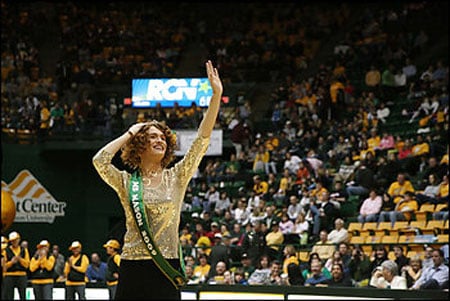 "Allen, who is gay and performs as a popular drag queen at local clubs, assumed the title of Ms. Mason. He was wearing a green-and-gold bow, sewn for him by the theater department costume's shop, that was visible even from the cheap seats, a sequined top, a black skirt and heels. Ricky Malebranche, a junior from Woodbridge, was named Mr. Mason.Beyond the joyful tears and tiara, Allen's election exposed conflicting cultural currents at the sprawling campus in Fairfax County. Many see it as an expression of inclusiveness at a place where about one-third of the 30,000 students are minority. But others say it is an embarrassment at an inopportune time when Mason is trying to revamp its image from commuter school to distinguished institution of higher learning.Officially, the university is 'very comfortable with it. We're fine,' spokesman Daniel Walsch said. The school does not require participants in the Mr. and Ms. Mason pageant to compete along precise gender lines, he said."

Watch a clip of the announcement, AFTER THE JUMP…