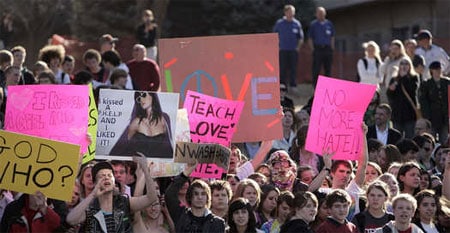 Take a good look at the photo above, because it’s the future.

When Fred Phelps and his clan showed up at Shawnee Mission High School in Prairie Village, Kansas they were met by hundreds of students and adults who faced off against them: 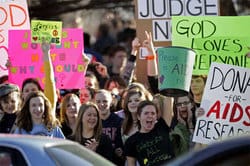 “Their message didn’t sit well with many students at the high school where, according to student Jake Davidson, there is a Gay and Straight Alliance at the school and students elected a homecoming king in 2007 who was openly gay. ‘Everyone is equal whether you’re gay or straight,’ said Davidson, a 16-year-old junior from Leawood and an organizer of the student protest. ‘It’s really cool that everyone wants to be involved and take a stand against this. It doesn’t surprise me that everyone wants to help out.’ He said word of the counterprotest ran through the school like wildfire. ‘It’s pretty much all anyone has been talking about this week,’ he said. Karl Krawitz, East principal, said the administration worked with Prairie Village police to make sure the dismissal of school went smoothly, and the demonstration did not impede traffic or the dismissal process.” 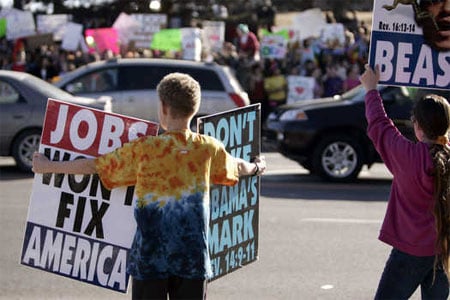