In a new interview with Popeater, Kelly Clarkson is asked about her former tourmate Clay Aiken and whether or not she’s gay. 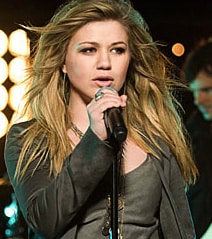 Says Clarkson: “I get that all the time. People are like, ‘Are you secretly a lesbian? Because I’d really love it.’ Lesbians tell it to me all the time. I’m like, ‘I’m glad it works for you and I wish I liked women like that because oftentimes men are very hard for me, but I happen to like boys.’ I could never be a lesbian. I would never want to date [someone like] myself, ever. I’m a crazy person. I need some kind of stable, quiet man. I don’t really care if you’re black, white, yellow, gay, straight, crazy, whatever. As long as you’re cool and you like the music, and you’re coming out to have a good time at the shows, I don’t really care. I have everything I just said in my family, so I’m just used to being surrounded by that. I just don’t know any different.”

On Aiken’s coming out, she says: “I was actually on vacation when I found out. He called and he just said, ‘You’ll probably get a lot of calls about this, but I just wanted to give you a heads up.’ I honestly don’t care if he is gay or isn’t gay, and I don’t care if he tells people or doesn’t tell people. I’m not friends with him for either of those reasons. If I’m a fan of an artist, I don’t really care if you’re gay or not gay, as long as you’re making cool music.”

Kelly Clarkson Gets What She Wants [popeater]