Dustin Lance Black was announced winner of the best original screenplay for Milk from the Writers Guild of America, while Simon Beaufoy took the other top film award for his adapted screenplay for Slumdog Millionaire. 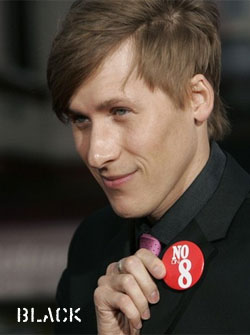 “The ‘Milk’ scribe brought the award-season jaded crowd at the Century Plaza to its feet with his heartfelt call for the gay/lesbian/bisexual/transgender community to think “beyond Prop. 8″ and demand that the federal government enact legislation affirming their equal protection under the law on a scale of the 1964 Civil Rights Act. Black (who says he generally drops Dustin and goes by Lance) may not quite be old enough to run for president (he was 4 when Harvey Milk was assassinated in 1978), but he knows his history. And he knows his showbiz history. He got a laugh in accepting his first award of the night by noting that ‘Milk’ wasn’t ‘the easiest subject matter to get produced. If you hadn’t noticed — it’s pretty gay…and it’s political.'”

Said Black to reporters in the press room: “I think America does love gay and lesbian people – a lot of them just haven’t met us yet. A lot of us are invisible. We need to come out of this invisibility, we need to let people know that we’re your aunts and uncles, your teachers and your truck drivers. This is not just about marriage.”

Black also won the Paul Selvin Award, “Presented to that member whose script best embodies the spirit of the constitutional and civil rights and liberties which are indispensable to the survival of free writers everywhere.”

The rest of the WGA awards, AFTER THE JUMP…

Other winners, via L.A. Times: