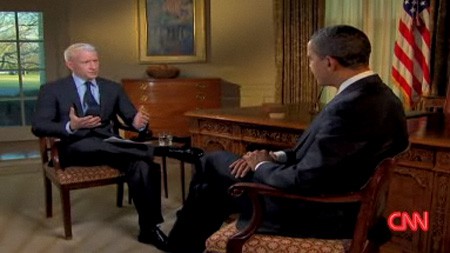 Obama did something yesterday that Bush rarely did over eight years — admitted he “made a mistake” with regard to the Tom Daschle debacle that went down over the past few days.

Said Obama: “Well, I think my mistake is not in selecting Tom originally, because I think nobody was better equipped to deal both with the substance and policy of health care — he understands it as well as anybody — but also the politics, which is going to be required to actually get it done. But I think that, look, ultimately, I campaigned on changing Washington and bottom-up politics. And I don’t want to send a message to the American people that there are two sets of standards, one for powerful people, and one for ordinary folks who are working every day and paying their taxes.”

At the end of the interview, Anderson threw in a few questions with regard to Obama’s first days in the White House.

COOPER: What’s the latest on the dog search?

OBAMA: We are going to get it in the spring. I think the theory was that the girls might be less inclined to do the walking when it was cold outside.

OBAMA: You know, I thought it was the phones until I realized that I didn’t know which button to press. That was a little embarrassing.

COOPER: Have you had a cigarette since you’ve been to the White House?

OBAMA: No, I haven’t had one on these grounds. And I — you know, sometimes it’s hard, but, you know, I’m sticking to — sticking to it.

COOPER: You said, on these grounds. I’ll let you pass on that. And final question, you’ve read a lot about Abraham Lincoln. What is the greatest thing that you’ve learned from your studies of Lincoln that you’re bringing to the office right now?

OBAMA: You know, when I think about Abraham Lincoln, what I’m struck by is the fact that he constantly learned on the job. He got better. You know, he wasn’t defensive. He wasn’t arrogant about his tasks. He was very systematic in saying, ‘I’m going to master the job, and I understand it’s going to take some time.’ But in his case, obviously, the Civil War was the central issue, and he spent a lot of time learning about military matters, even though that wasn’t his area of experience. Right now I’m learning an awful lot about the economy. I’m not a trained economist, but I’m spending a lot of time thinking about that so that I can make the very best decisions possible for the American people.”