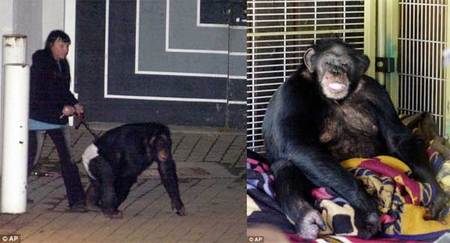 This is why it’s not wise to keep wild animals as pets:

“Charla Nash, 55, had just arrived at her friend Sandra Herold’s house when the chimp, named Travis, jumped on her and began biting and mauling her, causing serious injuries to her face, neck and hands, according to Stamford Police Capt. Rich Conklin, who said the attack was unprovoked. Herold had called Nash to her house to help get 14-year-old Travis back inside after he used a key to escape. While her friend was being attacked, Herold tried to pull the primate off her, but was unsuccessful. She then called 911 before stabbing the chimp with butcher knife and hitting him with a shovel. Neither fazed Travis, who police said was like a child to Herold. Stamford police later shot the chimp multiple times after he attacked an officer inside a police cruiser, Conklin said. Travis returned to the house, where police later found him dead. Conklin estimated that Travis weighed close to 200 pounds.”

Sad from every angle.