For a couple of months now, news has been simmering about a patient with AIDS in Berlin, Germany who underwent a stem cell transplant from a donor with a mutated gene. The mutation reportedly “confers natural resistance” to the HIV virus. 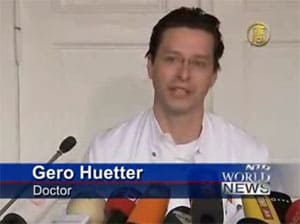 CNN reports: ” The case was first reported in November, and the new report is the first official publication of the case in a medical journal. [Dr. Gero] Hutter and a team of medical professionals performed the stem cell transplant on the patient, an American living in Germany, to treat the man’s leukemia, not the HIV itself. However, the team deliberately chose a compatible donor who has a naturally occurring gene mutation that confers resistance to HIV. The mutation cripples a receptor known as CCR5, which is normally found on the surface of T cells, the type of immune system cells attacked by HIV. The mutation is known as CCR5 delta32 and is found in 1 percent to 3 percent of white populations of European descent. HIV uses the CCR5 as a co-receptor (in addition to CD4 receptors) to latch on to and ultimately destroy immune system cells. Since the virus can’t gain a foothold on cells that lack CCR5, people who have the mutation have natural protection. (There are other, less common HIV strains that use different co-receptors.) People who inherit one copy of CCR5 delta32 take longer to get sick or develop AIDS if infected with HIV. People with two copies (one from each parent) may not become infected at all. The stem cell donor had two copies.”

Doctors say the dangers of the operation are too great to make it routing – nearly a third of patients die during the stem cell transplants as the immune system is virtually destroyed while it undergoes the process.

Said Dr. Gero Hutter of Charite Universitatsmedizin Berlin in Germany of his patient: “The patient is fine. Today, two years after his transplantation, he is still without any signs of HIV disease and without antiretroviral medication.”

Watch a clip of the original news conference on the operation, AFTER THE JUMP…