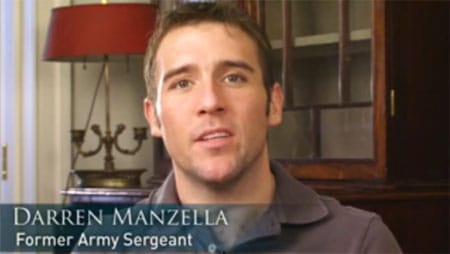 "Democratic Rep. Jim Moran said he has requested monthly updates fromthe Pentagon on the impact of the policy until it is repealed. In a statement released on Thursday, Moran said the dischargedsoldiers included an intelligence collector, a military police officer,four infantry personnel, a health care specialist, a motor-transportoperator and a water-treatment specialist. 'How many more good soldiers are we willing to lose due to a badpolicy that makes us less safe and secure?' asked Moran, a member ofthe House panel that oversees military spending."

And I apologize that this rally slipped by me earlier this week, but tomorrow, on the grounds of the U.S. Capitol at noon, Servicemember's Legal Defense Network is holding a Freedom to Serve rally as part of its Lobby Day.

SLDN writes: "People from all backgrounds – gay, straight, young, old, black, white,Latino, Asian – will come together to raise their voices for equalityand call upon Congress and President Obama to take action. Our messagewill ring loud and clear: The time for repeal is now."

Listen to former Army Sergeant Darren Manzella's message about "Don't Ask, Don't Tell" and the rally tomorrow, AFTER THE JUMP…