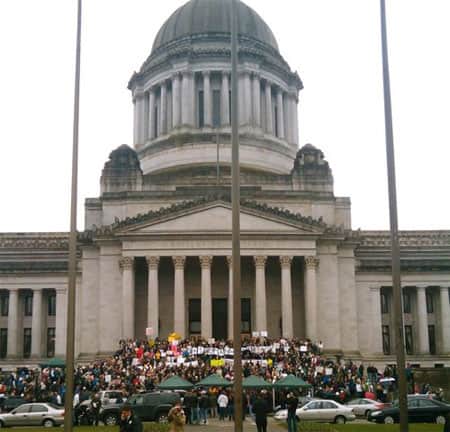 Dominic Holden of Slog reports on the rally held by anti-gay religious folks on the steps of Washington's Capitol Building in Olympia yesterday in anticipation of the House taking up a Domestic Partner bill that has already been approved by the state senate and has more co-sponsors in the House than it needs to pass.

Said state senator Ed Murray, the bill's sponsor in the senate, of the rally: "I think the rally is probably more of an attempt by certainorganizations to find a reason for being, to fill their own coffers andkeep their own organization going. They are down in polls and down in the legislature. It is not a happy time for them."

The measure would provide virtually every right of marriage but the name. That, Murray has hoped, would be the next step.

Murray talks about the bill, AFTER THE JUMP…