A man was assaulted Sunday night after leaving Blake's on the Park bar in midtown Atlanta, while he was walking to the nearby MARTA (rapid transit) station, the Southern Voice reports: 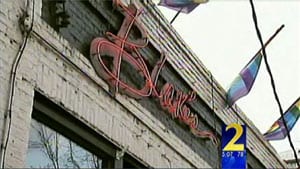 "Details remain unclear, according to LGBT liaison Officer Dani Lee Harris, who is following the case. It appears the young man was attacked near 10th Street and Juniper Avenue in the heart of Midtown. The victim, 28, reportedly suffered broken teeth, damage to his nose and required several stitches. He was treated at Grady Hospital overnight and released Monday, according to his friend, Scott Horton.

… After leaving Blake's, the victim was walking to MARTA when two white men called him over, Horton said. The men allegedly asked the victim if he is gay, then beat him after he responded that he is. … 'He assumed the two guys were men he had met and they said ‘hi’ and called him over. He went over and said hi. They asked him if he was gay and when he said yes, they knocked him down and kicked him in the face,' Horton said.

WSB Atlanta talks to Philip Rafshoon, owner of Outwrite bookstore, near where the attack took place, and has a video report on the incident.