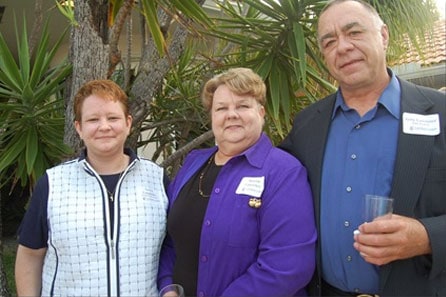 You may remember the story of Janice Langbehn (above, left)  the Seattle woman whose partner Lisa Pond suffered a stroke in July 2007 right before the couple and their three kids were scheduled to leave on a cruise vacation from Miami. Even after a power of attorney naming Langbehn was sent to Jackson Memorial Hospital, the hospital refused to allow Langbehn access to Pond, who died of a brain aneurysm about 18 hours after being admitted. Langbehn was finally allowed to see Pond as a priest delivered last rites.

Langbehn recently had a bit more closure to that horrific episode. At a reception in Fort Lauderdale on Saturday, she was able to meet Jerry Lawrence (above, right, with wife Maxine), whose life was saved after receiving Pond's heart in an organ donation.

Said Langbehn: "This is the best outcome I could hope for. Lisa is inside of him.”

Lambda Legal has filed suit on behalf of Langbehn and her three children.