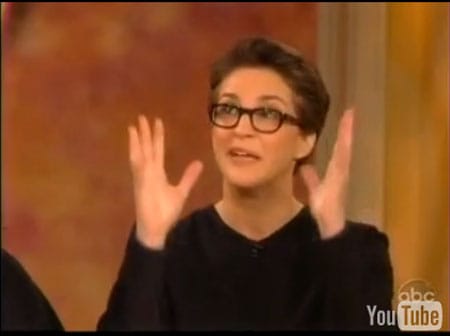 At Rachel Maddow's first appearance on The View yesterday they discussed how Maddow was outed to her parents by anonymous letter. Maddow also discussed meeting her partner Susan Mikula, being 'glammed up' as a news anchor, and her childhood as a tomboy:

One of our commenters brings up a good question. 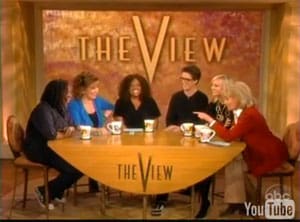 The conversation prompted Barbara Walters to point at Whoopi Goldberg and say, "She's about to come out of the closet today."

Replied Whoopi: "Please, that door's been open for years…"

Has it? Or did Whoopi just finally open it?

Goldberg appeared at last November's Prop 8 protest in New York and discussed it on The View, but never mentioned her own sexuality, only that she was there for her friends. That was indicated by the sign she held as well.

In 2006, Goldberg told the New York Times: "No, I am not a lesbian. I describe myself as heterosexual. I think it is hard to have good relationships with anyone."

I'm not sure if I missed something since 2006, but please fill me in if I did.

(clip via I am a TV Junkie)