In an interview with CNN's Don Lemon, RNC Chair Michael Steele says his prolonged feud with Rush Limbaugh was part of a "strategic" master plan. 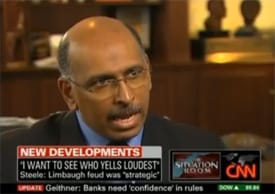 Says Steele: "If I do something there's a reason for it. It may look like a mistake, a gaffe. There's a rationale behind it."

He says the rationale behind his Rush Limbaugh plan was that he wanted to "see what the landscape looks like, see who yells the loudest. I want to know who says they're with me , but really isn't…It helps me understand my position on the chess board. It helps meunderstand you know, where the enemy camp is and where those who insidethe tent are."

His master plan doesn't extend to his future political aspirations, apparently. Because he also says he's never thought of running for president, and if he does, it's because it's God's plan, not his.

I wonder what his "strategies" are behind his views on gays and abortion?